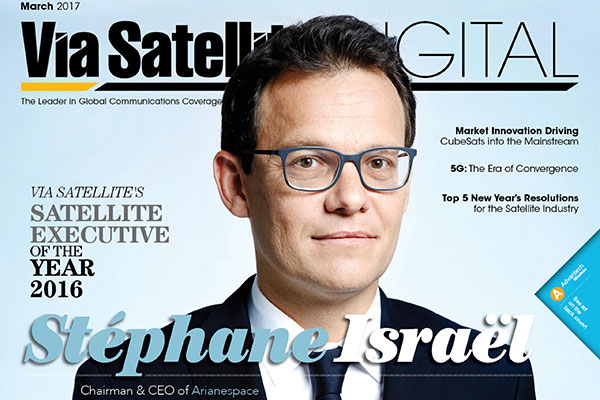 Satellite Executive of the Year Award Presentation Luncheon to be held Wednesday, March 8, at the SATELLITE 2017 Conference and Exhibition

ROCKVILLE, Md. – February 15, 2017 — Stéphane Israël, the Chairman & CEO of Arianespace, has been named Via Satellite’s Satellite Executive of the Year for 2016. Arianespace’s performance during 2015 and 2016 has been flawless and impressive on so many levels. At the helm of the company since 2013, Stéphane Israël has proven himself a true leader guaranteeing Arianespace’s success in an increasingly competitive and changing environment.

So, what was that impressive about Arianespace in 2016? In 2016, the company performed 11 successful launches. This included seven launches of its heavy launcher Ariane 5, which set several new records. The numbers are fantastic for the Ariane 5 with such feats as bringing more than 10.7 tons to GTO, delivering 4 Galileo satellites at once for the first time and reaching a record of 77 successes in a row since 2003 on December 2016.

But, while the numbers are impressive, they don’t tell the whole story. In 2016, Arianespace secured two future launch vehicles, Ariane 6 and Vega C, thanks to crucial ESA decisions made in November 2016. Moreover, Arianespace adopted new governance, when CNES shares were transferred to Airbus Safran Launchers. In both cases, Israël has proven as skillful navigating the European institutional waters, as he has signing new contracts, positioning the launch service provider to go from strength to strength.

When Israël took over at Arianespace in 2013, the launch service provider faced more competition than ever before. Despite an uber competitive environment, Israël has flourished, building on Arianespace’s impressive legacy and signing contracts with some of the bright new things of the satellite industry such as OneWeb and SkyBox Imaging (Terra Bella) while maintaining Arianespace’s long term relationship with global and regional operators. It is for these reasons Via Satellite has voted Stéphane Israël to be our Satellite Executive of the Year for 2016.

“It is hard not to be impressed by the job Stéphane Israël has done at Arianespace over the last few years,” said Mark Holmes, Editorial Director of Via Satellite. “We take for granted successful launches now from Arianespace, but history shows us that this is still far from easy. But, what has really impressed me is the fact Israël has taken the company to new heights in terms of contracts, launches as well as making significant progress to bringing better launch vehicles to market. Israël was a worthy nominee in 2015. He is a worthy winner in 2016, and has shown himself to be an executive of the highest calibre in his short time at Arianespace.”

“I am very honored to receive the Satellite Executive of the Year Award,” said Stéphane Israël, Chairman and CEO of Arianespace. “I dedicate this award to the Arianespace team, which is simply amazing. And I am grateful to our customers and partners for their trust. The space industry and market have never experienced such rapid change as it has today. Arianespace is excited to face these new challenges, with a pioneering spirit to meet and overcome them.”

For 30 years, Via Satellite magazine has been honoring the satellite executives who made a lasting business impact on the global satellite market during the previous calendar year.

Via Satellite magazine will showcase Israël in its “Satellite Executive of the Year” cover feature in the March issue. Stéphane Israël will be presented with his award at the Satellite Executive of the Year award luncheon on Wednesday, March 8, and a reception that will be held that evening. Both events take place during the SATELLITE 2017 Conference and Exhibition, which runs March 6-9 at the Walter E. Washington Convention Center at 801 Mount Vernon Pl, NW, Washington D.C. For more information or to register, visit www.SATShow.com.

About Via Satellite
Via Satellite, the satellite community’s leading magazine, keeps its 37,000 global subscribers ‘in the know’ by providing essential news and analysis on the commercial communications, broadcast, military and enterprise sectors of the satellite marketplace. Every issue includes information on current and evolving applications, infrastructure issues, technology, procurement reports and business and regulatory developments around the world.

About SATELLITE 2017
Produced by the Access Intelligence aerospace group, the SATELLITE Conference and Exhibition unites the aerospace community together in one place for the largest and most important global satellite technology event of the year. For more than 35 years, SATELLITE has played a critical role in determining how satellites will shape the future of our world. The show welcomes a community of aerospace professionals from every market and field of study, hailing from more than 150 nations around the world for a comprehensive four day conference, and more than 350 exhibiting companies on the show floor. SATELLITE 2017 will take place March 6 – 9, 2017 at the Walter E. Washington Convention Center in Washington D.C. For more information, visit www.SATShow.com.

About Arianespace
To use space for a better life on earth, Arianespace guarantees access to space transportation services and solutions for any type of satellite, commercial as well as institutional, into any orbit. Since 1980, Arianespace has performed missions placing more than 540 satellites into orbit with its three launchers: Ariane, Soyuz and Vega. Arianespace is headquartered in Evry, France near Paris, and has a facility at the Guiana Space Center in French Guiana, plus local offices in Washington, D.C., Tokyo and Singapore. Arianespace is a subsidiary of Airbus Safran Launchers, which holds 74% of its share capital; the balance is held by 17 other shareholders from the European launcher industry. For more information about Arianespace please visit www.arianespace.com.